The purpose for this trip was to attend the reunion of Gail's grade school. On the way we did some sightseeing, visited with family and friends, and gave talks about Hubble.

Our first sightseeing stop was the Soo locks. The day was overcast and we arrived just after a large ship had passed through on its upward journey. We watched the Bide-A-Wee excursion boat pass through the MacArthur Lock. Then we watched a display in the visitor center giving status as the Greek-registered ship Chestnut approached from Lake Superior. Finally, the 607-foot vessel came into view and passed through the Poe Lock.

The next day we took the ferry to Mackinac Island. The day began very foggy but turned clear and sunny in late morning. Transportation on Mackinac Island is by horse or bicycle because cars were banned over 100 years ago. The main industry on the island is selling fudge to tourists. My kind of place!

We rented bikes and cycled to the fort that overlooks the village at the harbor 150 feet below, and then on to Arch Rock. The fort was the site of one of the first conflicts of the War of 1812. A British force surprised the American soldiers before the Americans knew that they were at war. Outnumbered, the Americans quickly surrendered.

One interesting curiosity of Mackinac was that someone or some group had stacked rocks on top of one another along the eastern shore of the island. In some places, it looked like a village of these little guys had been assembled.

We skipped the 123-year-old Grand Hotel. It was not our cup of tea. We did, however, visit the American Fur Company store where French Canadian voyageur Alexis St. Martin was shot in the stomach in 1822. He survived, but the hole never closed. The surgeon at the fort, Dr. William Beaumont, used the opportunity to make many discoveries about human digestive processes. Despite the hole in his stomach, Mr. St. Martin outlived Dr. Beaumont.

After Mackinac Island, we first headed to Crystal Falls for the Humongous Fungus Festival and then to Marquette.

In Marquette, we visited Murray at the Jacobetti Home in the morning. For being 95 years old, he seemed to be in fair health. He complained about not being able to see well enough to read. As usual he had trouble remembering and hearing. It must be very depressing for him, not being able to read, to hear movies, etc. 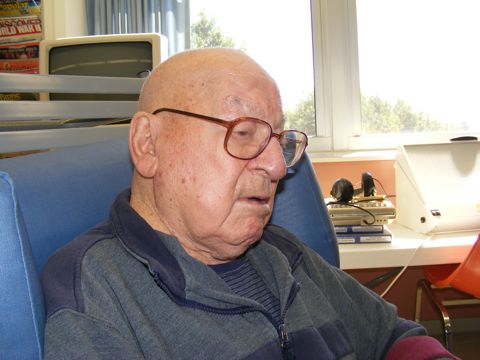 After lunch we visited with Carl and Ruth Ann, with nephew Chris and April, and with their boys. The boys were participating in the children's events of the Ore to Shore bike race. It was Caden's 8th birthday and he competed in the 4-mile, 8-and-9-year-old section of the Junior Rock race. Griffen participated in the Little Rock one-mile ride. Surprisingly, this day was one of the hottest of our trip. Usually Marquette is cool.

After Marquette, we first went to Iron River, pausing on the way to visit Horse Race Rapids on Paint River. 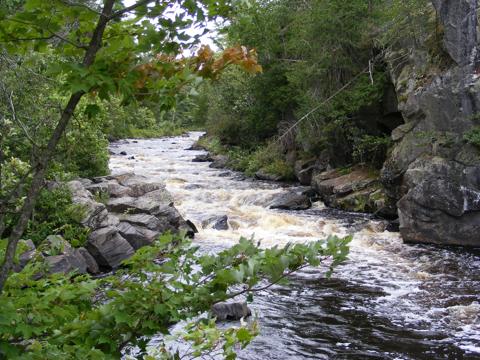 It was great to get together with some of Al's former classmates and teachers, and to hear and see the loons on Ice Lake.

After two days in Iron River, we headed to St. Paul to visit with the Burkes. While there we saw a performance of The Scottsboro Boys at the Gutherie Theater. This is, surprisingly, a musical based on the unfair trails and convictions of nine young blacks beginning in 1931. The musical was written by the same men who had created Cabaret and Chicago. It will open on Broadway this fall. We enjoyed it. 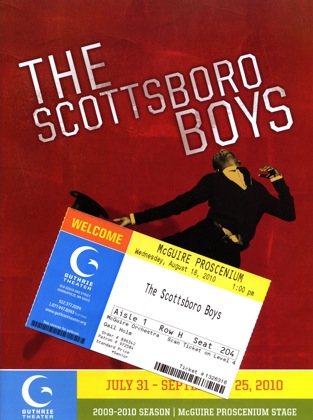 Our next leg took us to visit Linda, Gail's childhood friend, near Marshfield, WI. With her, we visited Jurustic Park, supposedly a re-creation of marsh creatures that became extinct when farmers moved into the area in the mid 19th century. The "curator" of the site, a retired lawyer, has an entertaining spiel. He will sell you some of the Little Critters for $100 to $300 each. If you decide to visit, get your directions off the Internet first; there are no signs to show you the way.

The last stop before Genoa City was Madison, where we visited with Maija. She took us to the farmer's market on the Capitol Square, where we bought gourmet popcorn among other things.

A village of only about 1,000 people when Gail grew up here, Genoa City, Wisconsin, has not been without its 15 minutes of fame. A fictional Genoa City is home to the soap opera The Young and the Restless. More recently, disgraced Illinois politician Dan Rostenkowski died in his summer home here on Aug 11th.

Gail's parents bought the hardware store when they moved here from Illinois. A few years later a new basement was being dug at the location of the Tasty Eats / Beer Garden - by then gone - when the hardware store slid into the hole. Luckily there was enough warning that everyone got out, and no one was injured.

The reunion included three consecutive classes from the old Genoa City grade school, the 8th grades of 1959, 1960, and 1961. We had a picnic at Veterans Park, toured the old school - now augmented with two additions and housing only kindergarten through third grade -, took class photos, and talked a lot.

Sherry, the woman in the red blouse, is married to a man who graduated from the Iron River, Michigan, high school a year behind Al. What are the odds that two couples from small towns (3,000 for Iron River and 1,000 for Genoa City) 327 miles apart would marry? They've got to be small.

Al gave presentations in four cities about Hubble and some of its history, its accomplishments, and how it works. Gail named it Al's 2010 summer tour. In Flint, Michigan, Al talked to about 70 students and staff at Mott Community College and to about about 80 members of the general public at Longway Planetarium. He came to Flint because a woman with whom he'd attended a summer science institute at Michigan State in 1961 had invited him. She is now Dean of Science and Math at Mott, and had rediscovered Al when searching the Space Telescope Science Institute site during Hubble's Servicing Mission 4.

The audience members ranged from elementary school children to retired physics professors. The feedback from everyone was positive.

We were also glad to have had the opportunity to visit with Chuck and Marilyn the evening before our Flint visit, and with Guy, Niki and Troy in St. Paul. We are grateful to Bill and Julie, to Maija, and to Debbie and George for having invited us to share their homes.