Here is a selection of the photos and a video I took during our trip to Florida in May 2009 to see the Space Shuttle Atlantis start its mission SMS-125 to service the Hubble Space Telescope.

On Monday, May 11, Gail and I (and thousands of other people) got to watch the launch from the NASA causeway crossing the Banana River. We were about five miles away from Pad 39A where the Atlantis was poised, but there was nothing but water between us so the view was great. This photo shows the white Orbiter seen from the top, mounted on the red-orange external fuel tank with the two white, solid rocket boosters on either side. They are all sitting on the launch platform with the service tower off to the left. The large water tower on the right began draining into the exhaust channel under the pad a few seconds before the engines fire so that the noise from the engines does not disintegrate the channel.

Here is some of the crowd waiting along the causeway. We were bused from a rendezvous point in Cocoa Beach three to four hours before the launch so hats, umbrellas, folding chairs, and bottles of water were very useful. We were kept off the grassy area to the right by a yellow cord. A tour guide we had on Wednesday said that the yellow cord kept us safe beause the alligators were trained not to cross it. ;-) We did not see any alligators while waiting here, but were entertained by dolphins, flamingoes, fish leaping several feet out of the water, osprey, anhingas, and pelicans. One of my co-workers even spotted a manatee. 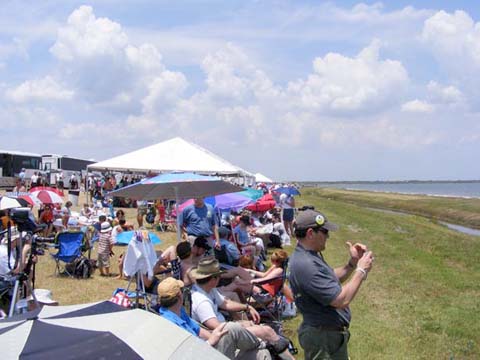 Here it goes. Right on schedule! Click here to see the video. [Use your back arrow when the video is done.] The first thing you see at this distance is a cloud of steam as the water in the exhaust channel is vaporized. Then you'll see the bright flames and the nose of the orange tank lifting from the pad. The roar of the engines doesn't reach us until about 25 seconds after ignition.

On Wednesday, we took the Kennedy Center "Up Close" tour. One of the stops was a viewing platform between launch pads 39A and 39B. Atlantis took off from 39A, but here waiting on pad 39B is the Endeavor. From this angle, you can't see the orbiter, but you can see the external fuel tank and one of the solid rocket boosters. To get an idea of scale, there are some cars parked on the ramp to the lower left and it looks like there is a large, white van on the launch platform to the right of the Shuttle.

NASA would normally not launch a Shuttle from pad 39B, but Endeavor was prepared there to rescue the astronauts in Atlantis if it suffered critical damage. When the Shuttle services Hubble, it cannot get from the Hubble's orbit to the Space Station's orbit. Therefore, if damage prevented them from landing Atlantis again safely, the astronauts would soon run out of air unless rescued by another Shuttle. 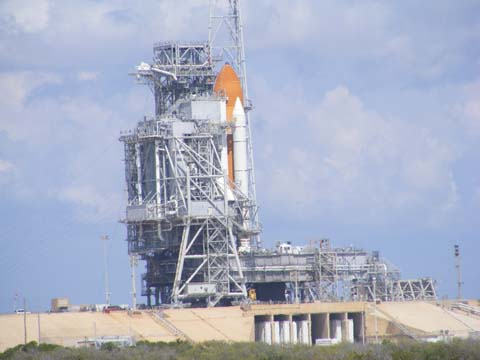 Our tour had another stop at the Vertical Assembly Building, originally built for the Saturn V rockets but now used for assembling the Shuttle stack. The building is 525 feet high, but it is hard to judge the scale here. Our guide said that the stars on the flag painted on the VAB's side are each six feet across and the stripes on the flag are as wide as a traffic lane on a highway. 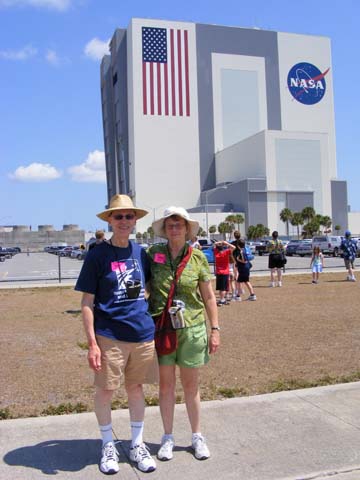 We did see a number of alligators in the ditches along the tour bus route, but I did not get their picture.

Perhaps the most impressive stop on the tour was at the Apollo/Saturn V Center. It is a large building with a Saturn V rocket lying on its side, complete with an Apollo command module. This photo from the bottom of the rocket shows the powerful engines and the enormous fuel tank, 30 feet in diameter. With the three rocket stages and the payload on top it is longer than a football field. It is amazing that anything that big could fly.

After our Kennedy Space Center tour, we drove across the Florida peninsula to New Port Richey on the Gulf coast. We wanted to visit a relative and to try out our new snorkeling gear.

For snorkeling, we went to Caladesi Island State Park in Dunedin. Here is Gail on the beautiful white sand beach. The water was a very comfortable 80+ degrees, but the snorkeling fell far short of expectations. There were no reefs where fish could hang out and the amount of silt in the water kept you from seeing more than an arms length. 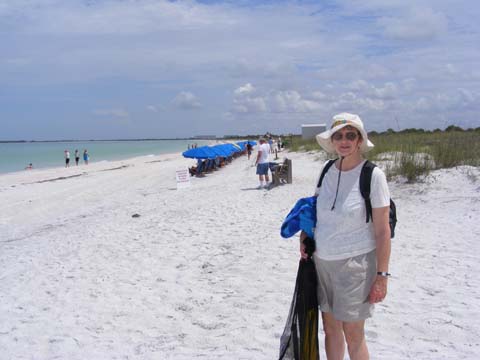 An osprey was perched on a piling at the landing for the ferry boat from Caladesi Island. It did not appear to pay any attention to the people and activity going on around it. 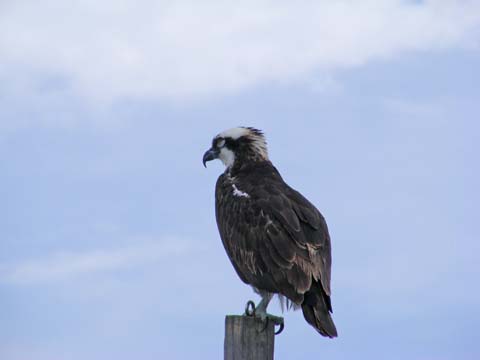 Those are pretty much the highlights. The Shuttle launch was impressive seen live. We got free tickets to the causeway viewing site because of my association with the Hubble project, but I heard of other people who had purchased them as part of a package (launch viewing, brunch, and space center tour). While in Florida, we met other people who had come without tickets. They planned to watch from the nearest publically accessible location. Of course, rocket launches are always at risk of being rescheduled, either because of equipment problems or weather, so you need to be flexible if you decide to see one. One woman at work said she went back and forth to Florida for a year as the Shuttle launch for the Hopkins Ultraviolet Telescope was scheduled and re-scheduled.