Gail and I returned to St. John in the U.S. Virgin Islands after going there just last year. We decided to return so soon because we had such a good time last year and because the place where we stayed was going to lose its lease in mid 2011. This time we stayed a full week, from January 10 through January 17.

The purpose of this posting is to convince you to take a vacation to the Virgin Islands and to do some snorkeling.

The Virgin Islands airport is on St. Thomas. Arrivals are a little more laid back that in most airports on the mainland. Here you can sip your rum drink while waiting for your luggage to be delivered. 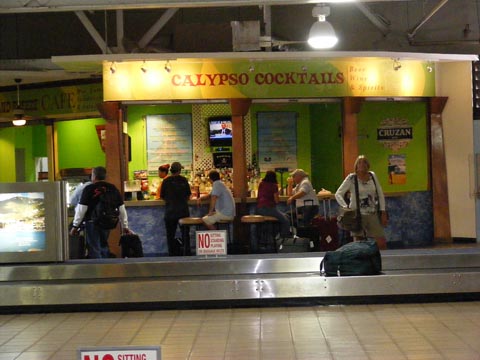 We stayed at Maho Bay Campgrounds again. The camp is located a hillside on Little Maho Bay. Our tent-cottage was conveniently located near the restaurant and the bathroom. We were 231 steps up from the beach, but survived the exercise. The staff here is quite friendly and helpful. Other residents are also friendly. We hung out a lot with a couple from Philadelphia with whom we shared a ride on an island taxi (a pickup with benches installed in the bed) from Cruz Bay. We also socialized with the couple who had been our neighbors at the camp last year.

Every evening there was something to do at the camp. The night we arrived there was a band playing after dinner. There are also glass blowing demonstrations, slide shows about nature and the island, movies, and even a star gazing walk. During the days you can do yoga, get a massage, and take pottery, painting or glass blowing classes.

We were there for snorkeling on the fringing reefs of the island and its cays. We snorkeled at Maho Bay, Waterlemon Bay, Hansen Bay and Hawksnest Bay. We also took a sailboat ride on the 23' island sloop Pepper to snorkel at Whistling Cay.

Our first full day on the island, we walked to the Annaberg Sugar Mill ruins, which overlook Leinster and Waterlemon Bays. This mill had been prosperous in the early to mid 1800s, when Denmark owned the islands.

We went snorkeling eight times during the six full days we had on the island. As I said last year, it was like swimming inside a tropical fish aquarium. This year it was windier, there was more wave action and it was cloudier than I remembered from last year. Nonetheless we had a great time.

Just before we left on vacation I purchased a Canon Power Shot D10 waterproof camera to use instead of the discardable film cameras we used last year. I used the new camera to take over 400 photos, most of them in the water.

We saw a shark, a couple of barracudas, sea stars, green turtles, a hawksbill turtle, an octopus, porcupine fishes, a spotted eagle ray, and at least 25 other types of fish that I've identified. I have photos of seven fish that are very distinctive looking, but which I cannot yet identify. And I have photos of lots of different kinds of coral, sponges, sea cucumbers, urchins, anenomes and more.

Because of the wave action, the water was murkier than I remembered. In order to make the images more clearer, I have used Photoshop Elements to stretch the contrast on many, but not all, of the photos below. For an example of what this looks like, here is an original photo of the spotted eagle ray next to the processed image.

Here is a sample of the things we saw.

Here are three distinctive looking fish that I have not been able to identify definitively yet. The one on the left may be a red hind and the one on the right a cero, but the one in the middle is still a complete mystery.

Last year I saw a flying gurnard, a very strange looking fish, crawling on the sandy bottom in Francis Bay, but I had run out of film by that time. This trip we saw two smaller flying gurnards lying on the bottom at the boundary between Maho Bay and Francis Bay. They were hard to see, but I got their picture.

We enjoy seeing the birds as well as the fish. The Bananaquit is the official bird of the Virgin Islands. Each morning the camp staff filled a feeder next to the restaurant and a large flock gathered. This bird is very quick moving and it is hard to get a well-focused image of one. We also saw a lot of pelicans, a little blue heron, a great egret, magnificent frigatebirds and more.

You never know what you will see or where you will see it when snorkeling. On our last full day on St. John, we went to Hawksnest Bay because we had not been there before. We swam for an hour and did not see anything interesting. After lunch, we went out snorkeling again while waiting for our taxi to return, and then we saw our second sting ray, our second porcupine fish and the spotted eagle ray. We would not have seen them if we'd chosen just to sit on the beach and take the sun.

You also don't know who will find you. During that last swim, this little fish, less than an inch long, began to follow us. It stayed with us for about a half hour until we went ashore. 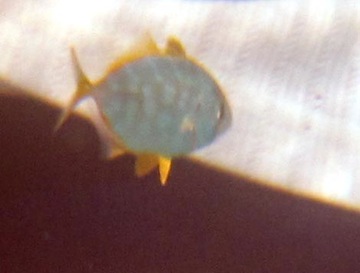 We weren't sure whether we would have trouble with the U.S. authorities during our return trip. On Saturday afternoon before we left, I read an internet posting saying that while you don't need a passport to travel to a U.S. Territory, such as the Virgin Islands, you do need one to get back home again! I called the airline and someone agreed with the posting. This was a problem because our passports were in our safe deposit box in the bank, the bank was closed, and our flight was scheduled to leave at 6:10 A.M. Monday. We explored the options for changing our flights until after the bank opened Monday morning, but eventually decided to go ahead with the original schedule. I can think of worse things than being stuck in the Virgin Islands for the rest of the winter. But it turned out that our Maryland driver's licenses were sufficient to get us through Immigration and onto our flights home.

If you decide to vacation on St. John or even move there permanently, get in touch and we'll share more of our experiences. 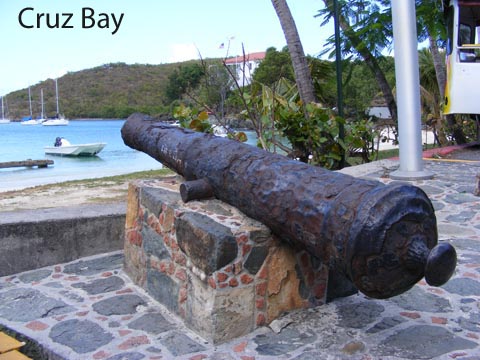