Our rendezvous point this year was a log cabin near Thurmont, Maryland during the weekend of October 15 through 18. 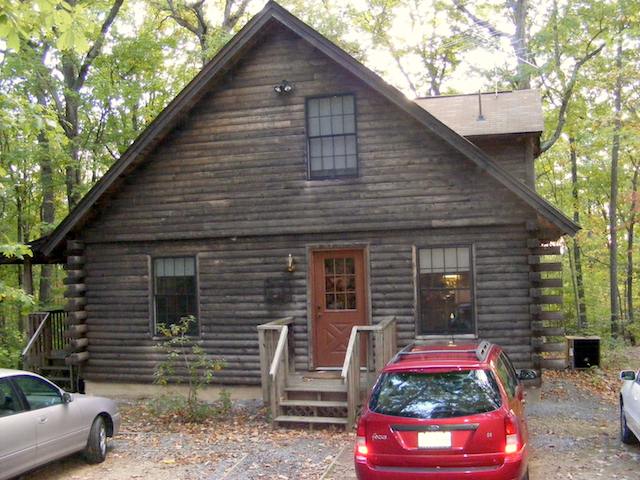 Gail and Al arrived around noon Friday to unlock the place. Everyone else arrived during the afternoon.

There was a place for everyone to lay his or her head, and then some. The Zinks got the master bedroom with a king-sized bed and its own bathroom, Maya took one of the two twin beds in the loft, Bowers and Burkes each had a lower-level queen-sized bed in the first floor bunk room, and the Holms took the king-sized pull-out bed in the downstairs recreation room.

The recreation room also featured a regulation slate pool table, a full sized air hockey, foosball and darts, but we did not take advantage of them.

After getting there and while getting settled, an important activity was our dining.

The kitchen included a microwave oven, a toaster oven, and a dishwasher (happinesss!) as well as a sink, range, convection oven, and refrigerator. The toaster oven did more crisping of the bread than toasting, so Bob Zink pleased us Sunday morning by making fry bread. The coffee maker failed Saturday morning - a real disaster - but a call to the owner later that day revealed a backup unit in the basement storage area. Glasses and wine glasses were in short supply, but we made do. The supplied knives were kind of dull, but again, we made do.

Gettysburg is where Robert E. Lee's second attempt to invade the Union failed.

Finding the National Battlefield Visitor Center at Gettysburg was our first challenge, but eventually both carloads got there. We thought about taking a tour bus, but the ones that serviced the visitor center did not allow the passengers to get out to walk around at the sites, so we opted for the self-guiding auto tour. After watching a film about the battle and seeing the cyclorama painting, &#147Battle of Gettysburg”, we visited the first three sites on the auto tour. By then it was 2 p.m and time for lunch. Our luncheon needs were satisfied at the Appalachian Brewing Company by sandwiches, soups, birch beer, and a variety of brews.

It was getting late when we got started after lunch, so we limited our stops to a field where a small group of Conferate re-enactors was performing, to Little Round Top, and to the High Water Mark, where Pickett's charge was repulsed.

The day was beautifully sunny, but a bit windy and chilly. It was good to get back to our cabin to the Bower's meal.

Antietam is where Lee's first attempt to invade the north was thwarted on Sept 19, 1862. There were more American casualties on that day than any other before or since. Some of the words of the survivors can be found here.

We were kind of late in getting there and then we watched films about Lincoln meeting with the Union general George McClellan and about the battle itself. Without breaking for lunch, we joined a guided tour that started at 1:30 p.m. Once we joined up with the Park Ranger giving the tour, we learned a lot. It was very sad to hear how thousands of soldiers were sent marching to their deaths because their commanders did not understand the situation and were inflexible in their orders.

Meet Me In St. Louis

We initially considered having next year's excursion at Oktoberfest in New Ulm, MN, but decided that accommodations and alcohol policy would be a problem. Then we agreed that descending upon the Zinks in St. Louis (lately named as the most dangerous city in the United States - Courage!) would be fun. Ann has suggested three events for our consideration: The Bowers would not be able to attend the Best of Missouri event.