This year we headed to Shawano in northern Wisconsin for the 31st Annual Shawano Folk Music Festival.

Our home for the weekend was at Sigrid's Bavarian Trail. Sigrid's restaurant and bar occupied the downstairs and we had two combined apartments upstairs. We had two kitchens, two living rooms, a glassed-in porch overlooking Loon Lake, two bathrooms, and six bedrooms.

We were able to use the lakeside lawn and dock as well. Fortunately, after rain Friday afternoon that turned heavy that night, the weather was good for outdoor activities.

The quality of the music at the festival was very high.

One of the highlights on Friday evening was the Russians - Stas Venglevski playing the Bayan, a Russian accordian, and Misha Litvin playing the Domro, a Russian mandolin. They not only did explosive Russian folk music, but also a movement from a Vivaldi concerto.

The acapella doo-wop group called 100% Natural was the crowd pleaser on Saturday evening. The Bowers had hosted them during a previous festival and at the "Gospel Sing" workshop on Sunday morning they surprised Lolly with a big hug. The second photo is from their performance at the "Roll Over, Beethoven" workshop.

Also performing Saturday evening were the bluegrass duo Eric Lewis and Tommy Burroughs. They appeared to have brought their own fan group and got called back for an encore. This photo is from the "Gospel Sing" workshop the next morning. 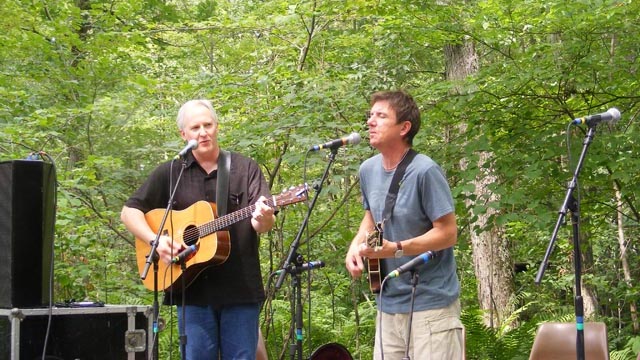 There were many other talented and memorable musicians performing that weekend, both during the evening concerts and the daytime workshops. Four that I especially enjoyed were Bill Staines, who may be best known for his Animal Song, Laurel Premo (at least in her workshop of fiddle songs she learned during a year in Helsinki), Tom Kastle, who sang songs of sailing the seas and the Great Lakes, and even Dr Kickbutt's Orchestra of Death, which is not very folksy. 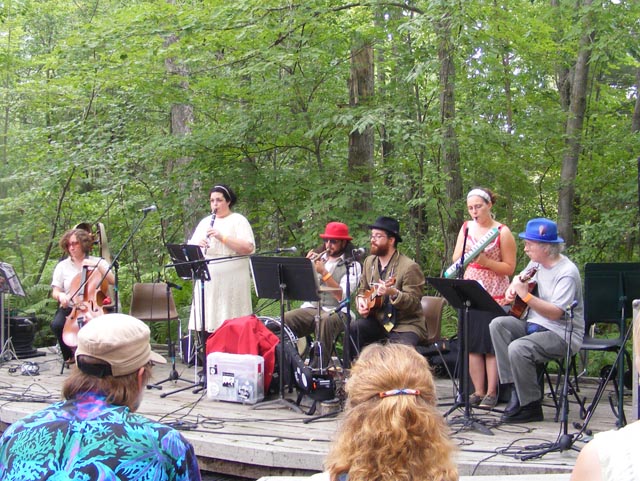 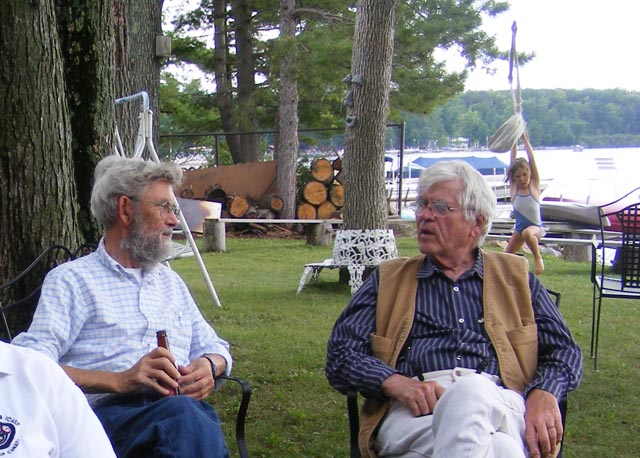 Of course, the reason for the long journey to northern Wisconsin was not the music. It was the food ... and the company!

Bob and Lolly's children and grandchildren stayed at the farm, but joined us for dinners and the evening social activities. The grandkids also had a great time playing in the lake.

Unexpected pleasures also came when the Bower's grandson caught a fish off the dock Sunday evening and when a pair of pilated woodpeckers visited all the lake-front trees on Monday morning.

Next year's excursion will either be to somewhere in the east, such as Gettysburg, PA, or to Michigan's Copper Country.