Here are some of the photos and a video from our trip to El Salvador for the “ 11th National Conference for Teachers of English” sponsored by the Centro Cultural Salvadoreño Americano.

Gail and I arrived in El Salvador around noon on Monday, July 12. We missed seeing the driver the Center had sent for us, so we caught a cab to our hotel, the Hotel Villa Serena San Benito. The hotel was clean, well located, and friendly. We were just around the corner from the art museum and in a safe part of the city. We quickly could recognize all the staff and they all knew who we were. Our room was located next to a little courtyard filled with tropical plants.

Our first evening in town, Margaretta, a staff member at the Centro, took us to a restaurant for pupusas. Great fun! The restaurant had glassless windows open to the outside. It was raining lightly, but much more comfortable than Maryland had been even though this is the middle of El Salvador's rainy season. Temperatures were in the 70s and 80s.

Security is an issue. Many businesses and facilities have a security guard in front, often carrying a pistol with a long barrel attached or a shotgun. (I did not take any photos of the guards.) Along the streets many walls are topped with coils of razor wire. We learned that previously Silvio, our friend and host, had received a threatening letter at his apartment that had demanded money. To escape the criminal gang, he left El Salvador temporarily while his friends moved him to a new apartment. Thursday afternoon Carmen, who works at the school, took Gail, me, and several other conference participants to the artisan’s market where we could shop for souvenirs. We finished our shopping and got back into her little car just in time for rush hour. She pulled up to a traffic light at an intersection where many people were milling about, waiting for buses. Carmen became very worried because she feared that someone in the crowd would come up to the car and shoot us. She insisted that we roll up our windows, even though it was hot in the car and she did not have air conditioning. No one ever did shoot us.

Someone did steal our credit card information, probably at one of the restaurants where we ate. I recommend you use cash if you visit. They use U.S. dollars for their currency.

The city seemed crowded to me. Most streets are winding, and none have more than four lanes. There are many plazas, which basically are traffic circles.

The conference was held in the Holiday Inn. It's theme was "Keeping Up With the Changing World". Several hundred teachers, professors, and education students attended.

During the first day lunch break, Gail and I strolled up the boulevard on which the Holiday Inn was located. We passed a fancy guard post manned by a Salvadoran soldier and saw the facility of the well-known newspaper, La Prensa on the other side of the street. I stopped to take a picture. When I did so, a whistle sounded behind me. I ignored it and took another picture. The whistle blew again, and then the soldier came up to warn me that pictures are not allowed. It turns out that we were standing beside the U.S. embassy on our side of the street. The soldier probably did not want me taking pictures of the embassy for reasons of security. Who knows, I might be a terrorist in some other universe. Anyway, here's my photo of the newspaper facility.

You will not see a picture of the U.S. embassy here.

We heard that the U.S. embassy was built on top of a Mayan ruin that was the chief town of this region. It would have been too expensive to excavate the site prior to the construction.

Gail's workshop was on the afternoon of day two of the conference. Here she is being introduced by Silvio, the Dean of the Instituto Especializado de Nivel Superior at the Centro Cultural.

After Gail's workshop, some people who had participated in the workshop came up to have their photos taken with her. Here are three university students with us.

On the evening of the second day, there was a reception and dinner for all the presenters and for the Board of Directors of the Centro Cultural. It was set up alongside the outdoor pool at the hotel. A violent storm came up that rained on some people and blew some tables over. Fortunately the food had not been brought out yet. Gail and I had been sitting at a table under an overhang with the board members so we stayed dry. The hotel staff quickly moved everything indoors to the ballroom, and the party went on.

Thursday morning, Mr. Farrand took us on a field trip to top of the San Salvador Volcano, which towers over the city. Mr. Farrand is chairman of the Board of Directors of the Centro Cultural. He grew up in Michigan, but moved to El Salvador in 1956 to teach English.

There was a parking lot about 100 yards below the top of the mountain. Trails and steps brought us up to the volcano’s 500-meter deep crater, El Boquerón. This volcano has not erupted in hundreds of years, but an eruption happened recently enough that it is still regarded as active and potentially dangerous to everyone in the city. Click on the righthand picture to see a brief video tour of the crater. Use your back arrow when the video is done.

The Centro Cultural center has many educational programs: elementary and middle schools, a high school, a three-year teacher's college, a university, after school programs, adult classes, and uplift classes for disadvantaged students. The physcial plant seems to be stitched togther from several buildings and appears to be as varied as the services.

I gave my talk to about 120 high school students at the Centro Cultural on Friday morning. My topic was the story of Hubble and its discoveries during the past 20 years. The purpose was to give the students practice in listening to native English speakers. I was surprised when it turned out that my PowerPoint was shown on a flat-panel display rather than being projected on a screen as the presentations at the conference had been. My laser pointer did not show on the display so I resorted to pointing with my finger.

In the afternoon we visited more classrooms, giving the students a chance to question and listen to native English speakers. That was followed by a birthday party for one of the staff members and a celebration of the end of the session. Students were encouraged to get the North Americans up on the dance floor and to try to teach them Salsa and Techno dancing. We were OK with doing the Twist, but no photos exist of that.

That evening Silvio and two of his colleagues took us to a Mexican restaurant for mariachi music.

A downpour started while we enjoyed the mariachi music. When we got back to our hotel, we found the floor covered with water. Someone had opened the windows to the courtyard during the day and we had not been back to close them. The night clerk mopped up, but was not too happy.

Saturday morning we took a field trip to Joya de Cerén, a Mayan village that had been buried under volcanic ash around 600 C.E. Like Pompei in Italy, the eruption preserved evidence of a way of life that otherwise would have been lost. It appears that the people were able to escape before or during the first fall of 30 cm of ash, but they left behind their utensils, their ceramics, their food, and their crops. Subsequent eruptions deposited many meters of ash over the site, hiding and preserving it until 1976.

On our way out of the excavation area, Caterina spotted a Torogoz, the national bird of El Salvador. This bird is uncommon and we were lucky to see one. 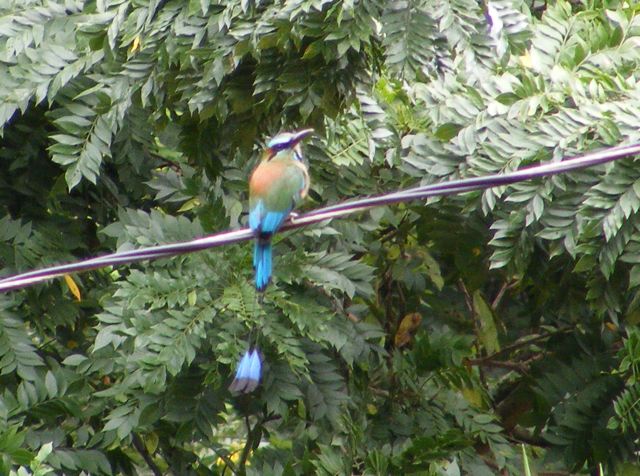 The weather was great from Monday through Friday: sunny during the day and rain at night. Furthermore, it was significantly cooler than it was in Maryland. On Saturday, we had intermittent showers during the day and on Sunday, a light rain all day. When we left on Monday morning, it was also raining lightly. We used the rainy time to visit the Museo de Arte and the David J Guzman National Museum of Anthropology. In both museums, all the descriptions and explanations were in Spanish except the Canadian government had a traveling exhibit of Inuit art at the Anthropology Museum where all the explanations were in French. Interesting.

We thoroughly enjoyed our visit and hope to return for the 12th National Conference in two years. By then, maybe, I will have some Spanish language skills.

Post Script: We have not gone back to El Salvador since then. Gail retired and felt she no longer had fresh knowledge to share with the students. In the following three years, I studied Spanish at Howard Community College. By the end of my studies, I could read some, but my verbal and listening skills were not good enough to have a conversation. I am really impressed by the skill of people who can communicate in more that one language.